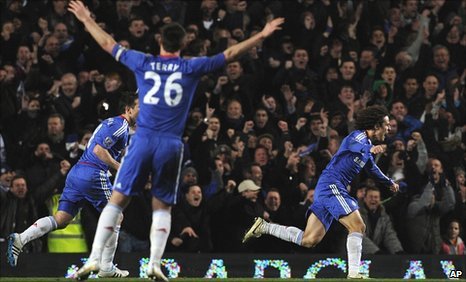 Chelsea have managed to keep their title hopes alive with their win over United tonight and go twelve points clear from top table. While it was United's to loose today, as the first half was dominated by their experience in mid-field with great passing through Scholes and Nani.

All eyes where on Torres at the start of the game and had a great ten minutes, showing pace and looking alive forcing a corner from a Vidic clearance. Both playing a 4-4-2 formation Chelsea showed more confidence in the first ten minutes as it looked like United where finding their feet. United started off playing very wide, with a surprised choice to play Chicharito upfront with Rooney whilst keeping Berbatov on the bench. Chicha didn't do much throughout the game, and at times looked like United needed the extra strength up front.
From Ramires booking in the thirteenth minute, the game continued to entertain with some great individual battles, shots on goal, important saves and five yellow cards and one red given to Vidic in extra time, who will now miss the clash between rivals Liverpool, who will now be feeling more confident after tonight's results and the loss of Premier Leagues best defender for United.
Rooney continued to prove a threat with his pace and strength getting through the Chelsea's defense, missing a  few goals traveling past the face of the goal. By the twenty minute mark United showed confidence and created space, with swift movement through the midfield as Chelsea looked anxious. Great play and a crucial pass from Nani provided us with the first goal of the game, a Rooney near- side strike as it looked like Chelsea would have a mountain to climb as they left a powerful United forwards too much space to maneuver and strike outside the box, his first from 25 yards in three years.


Van Der Sar proved his ability still regardless of age with a superb 'three in one' save if you like from a powerful Malouda free kick after Torres was brought down by Evra. VDS managed to get a hand to the ball and flicked it out enough for Chelsea to be denied an tie. Vidic was dealt a yellow card in the 44th min, proving costly in the outcome of the game.


It was the second half when the shift of play changed, with United put on the back foot and playing deep as Chelsea looked more confident and it was a matter of time before they would equalize. Evra  and Nani proved trouble for Ramires on the left but it was a great right foot volly in the 53rd minute from Luiz that was unstoppable by VDS as it bypassed him on his left. Chelsea took control and United looked like they needed a change of play, especially as Chelsea subbed Drogba on for Anelka. Giggs and Berbatov where brought on for Scholes and Hernandez. This was Giggs 606th game and anniversary of his debut for United, and not the result that will mark this achievement.


It was to be a 'trip over' by Zhirkov over Chris Smalling, that would give Chelsea a penalty and a goal from taker Lampard. Not a clear cut penalty but non the less a great strike by Lampard. United seemed to let Chelsea dominate, and United fate was sealed when shirt pulling by Vidic outside the box forced Ramires to go down in the box. One of them had to go as both on two yellow cards. Full time and Chelsea will be relieved to have pulled out a great performance in the second half to show there fans and the Premier League, all is not lost.


It proved to be a perfect game. Two Premier League giants creating an entertaining tie with goals, challenges, great passing, pace, strength, battles and a tale of two half's. This is why Premier League is the best league in the world. 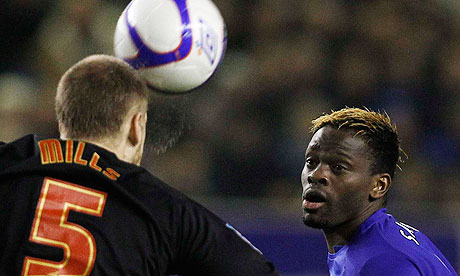 Everton where the favorites to win the tie with Championship side Reading in the FA Cup quarter finals wining Chelsea in the previous game and coming out of a win against Sunderland at the weekend, making their league hopes of climbing to 5th sport more optimistic (4 points off with a game in hand.)


But Reading are no strangers to 'Giant' killing, as we remember them knocking out a Rafael Benitez' Liverpool side in 2010. And Everton are no strangers to being 'killed' from smaller teams throughout the competition in previous years. Tranmere Rovers in 2002, Oldham in 2008 and a league two Shrewsbury in 2003, to name a few.


Everton where great down the left but Reading proved to have a hold over Everton from a early start and it was not looking easy for the blues and Reading where proving to be dangerous at times. Mills low volley from a chest down in the 26th minute was the games only goals. At time Everton picked up momentum but even thought they showed some promise of scoring from shots from Saha and Arteta in the first half, they don't have an out and out goal scorer that will be there in the box poking them in. Everton have not won from starting behind in the past 14 games... Make that 15
Posted by Wonder8Woman at 15:03 No comments: Hernandez happy to stand aside for Rooney tonight at Stamford Bridge

Tonight, Chelsea and Manchester United will face each other at Stamford Bridge. A great game to commence my first post match commentary blog. Chelsea a team who seem to be facing a lack of confidence from numerous losses, and under performing 'dream team' players, mostly due to injury and most defiantly, in my opinion and sense of 'right' I think Chelsea thought they had to be at the top of the Premier League, complacency against lower league teams pre-christmas possibly? With recent reports stating that three of their top players may not be Chelsea player next season, it should be a 'no brainer' of who will win the tie tonight. However Manchester United have not been the consistently stronger team in the Premier league, like they used to dominate for a couple of seasons. With an aging first team and one or two key players out with long term injury, watching Manchester United, a win is never as certain as it was. Rooney seems to be getting back into his stride, his goal scoring is coming back slowly and surely, but what makes him a world class player, is his ability to assist and read the game. You could play Rooney in any holding position and be confident he will give his 100%.

I can't see Ferguson keeping Berbatov out for tonight's tie as he has for the previous two games, I think United will need a strong player with experience to drive up front. With Hernandez showing his confidence, and his obvious ability to poach the goals and finish (his shot to goal ratio is higher than both Berba and Rooney) he would seem an obvious choice to play above Rooney, however, right now seems a bit of a risk for a 90min game. After not recieveing a match ban for his deliberate 'elbow' during the Wigan game, it will undoubtedly be a Berba/ Rooney striking force. With both on form I think tonight United will hold a tight 1-0 win.


So I'm known around as 8WonderWoman on several social networking sites as I am also know for a lack of concentration and an attention span of around five minutes, hence the title of my first blog post 'must remember.' I MUST REMEMBER, if this blog is to be as successful as i wish it to be, to come on every day or at least every week to round up the weeks 'Football headlines/ news.' Which brings me nicely to the intent of my blog. Football... nothing more, nothing less. A way of life, a way of MY life! Passion is an emotive word that roles off the tongue easy, but its PASSION that has kept me in a League One club, working only match days and also expands my 5 minute concentration span, when watching or talking (often debating) about the beautiful game.
Now lets get a few things straight before I immerse myself in this 'blogging.' I talk a lot, I ramble and I get very excited when talking about something that 'excites' me funnily enough. I don't claim to know every fact about football, I often forget names and past score line's and winners of every cup in the world. But I DO know what I am talking about, as in my 24 years of existence I have been fully emerged in Football Culture, playing football from a young age and also attending matches each weekend, whether this be Tranmere Rovers of whom i work for or Manchester United games of whom I 'support.' I have been fully surrounded by predominately Everton fans with an annoying sprinkling of Liverpool fans and, including myself and my sane family around me Manchester United fans. Arguments, debates and fisty- cuffs are common on Merseyside where I hail from due to the football legacy that defines our county. Derby's are often the staple to any football ball fans calender, such as the rivalry of the nearing town Manchester. Night out, days in, saturdays routine are all based around the daily football timetable.
Ok, so you don't need me to underline the importance of football in the weekly UK football fans routine. Which leads me to say i will not just be blogging about the British football leagues Yes, it will predominantly be about the Premier league as it is the best league in the world an I am not biased, just stating a FACT, but I will be attending and addressing international football and La Liga and occasionally Seria A. I have had a lot of experience attending Mexican football games, international and league. Yes! Random maybe but you may find an odd sprinkling of this, mostly because of the Mexican sensation 'Chicharito' who has graced our shores.
I will remain unbiased throughout my blog, I will not aim to insult a team or set of fans, but occasionally might. What fun would it be otherwise?
I am writing this blog after given some valuable advice on Twitter, when i posed the question 'How do i get further in the football industry.'  A broad industry which i narrowed down to 'Journalism or Match reporting.' And as i have no journalism experience or qualifications (but in fact a History of Art degree) i was advised blogging would be worth a shot!
I have a fantasy football team that i was topping my three joined leagues with before Christmas, however i have been on a quick decline. This may be an underlying theme at times :)

Now I feel i have took enough of your time. I have only briefly touched on tonight's football, but i will provide a post match blog and at the end of each gameweek, will create an overview of the weeks football, with emphasis on the weeks biggest games.

I hope you will pop back, and I hope in future blogs to be more concise and to show you more of my personality and what i can pull out of the bag :)

Wonder8Woman
I work for a League One football club and i am very passionate about football and i hope this blog reflects my goal to become a successful woman in the football industry.